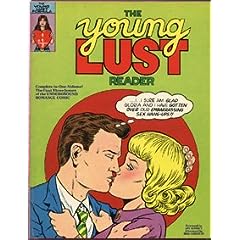 From the back cover of its reader:

“Once you have experienced YOUNG LUST you’ll never be able to look at another “True Love Romances” in the eye again without cracking up. To have all three YOUNG LUSTS under one cover is almost too much to take!” – Ed Ward, City Magazine

“Occasionally something comes along that too good not to mention like YOUNG LUST, the series of mock-sexploitation comic books that parody perfectly the picaresque sexuality of teenage female cartoon fantasies!! – Howard Smith, Village Voice

“In this world there are three things we can be sure of debt, taxis and YOUNG LUST!!” – David Ossman, Firesign Theatre

“YOUNG LUST is almost impossible to read. You get halfway through the first story when suddenly you are rolling on the floor laughing your head off! Affords the whole family endless hours of pants-pissing entertainment!!” – Dean Latimer, East Village Other B&W