Coke? The perfect commodity. Why?

In The Pervert’s Guide to Ideology documentary Slavoj Žižek explains.

(update: the documentary was taken offline a few days after I had posted it.)

The full text of the The Pervert’s Guide to Ideology is here[1].

Sex: The Revolution (2008) was a four-part documentary miniseries that chronicled the history of sexual culture in America from the 1950s through the turn of the millenium. Ironically, the version shown on VH1 was pixelated to censor nudity including in discussions of censorship of nudity.

I’m afraid this is that pixelated version.

Previously on this blog: Do Communists Have Better Sex?[5], 2006, a documentary by André Meier

“Knee 1” is a segment from the opera Einstein on the Beach (1976), an opera scored and written by Philip Glass.

The 1978 recording above was released by Columbia Masterworks Records, with an illustration by Milton Glaser. The solo voice is by Iris Hiskey.

Saw the play Liefdesverklaring with my students at De Studio, Antwerp by Fabuleus.

Liefdesverklaring  (lit. declaration of love) is based on Offending the Audience (1966, German: Publikumsbeschimpfung) by Peter Handke, an anti-play that breaks the fourth wall.

Publikumsbeschimpfung can be seen in full above.

An animated short film by Frédéric Doazan. It is a critique of the female beauty ideal and cosmetic surgery. 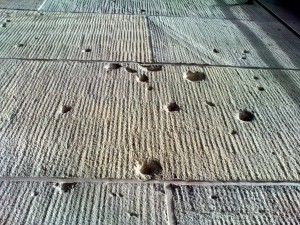 I’m back from Berlin.

I’m guessing everything was destroyed during WWII.