2018 is around the corner. As always, I check the new authors/painters/musicians whose work becomes public domain in 2018. 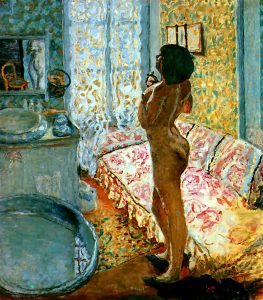 Nude Against the Light by Pierre Bonnard

Major names this year include:

Sunny Murray was an American musician, one of the pioneers of the free jazz style of drumming.

His album Sonny’s Time Now (1965) is in the Top Ten Free Jazz Underground.

On that record Amiri Baraka reads his controversial 1965 poem “Black Art” (above) which features the line “we want poems that kill”, an instance of the aestheticization of violence.

Alain Jessua was a French film director and screenwriter who directed ten films between 1956 and 1997.

Léon la lune (1956), a film documenting the life of the ‘clochard‘ of the title, was Alain Jessua’s first film and it won the influential Prix Jean Vigo in 1957. The short film was inspired by Jean-Paul Clébert’s book Paris insolite (1952), the first of a series of realist photojournalistic books depicting the underworld in Paris. Clébert’s friends Jacques Yonnet and Robert Giraud wrote their own tales of the vagabond life on the streets of Paris; Yonnet wrote Paris Noir (1954), and Giraud’s Le Vin des rues (1955). The three frequented the same haunts as the youths of Letterist International, and this scene would become the subject of Ed van der Elsken’s photonovel Love on the Left Bank (1956), the most popular depiction of Parisian bohemian bar life.

Jessua first came to my attention for his “pop art film” The Killing Game (1967, above), a collaboration with the late Belgian illustrator Guy Peellaert.

Over the weekend, while visiting a Robert Doisneau exhibition (he also did montages/collages![1]), I wound up in the permanent collection of the Museum of Ixelles and was surprised by Beached Fish (1643) by Dutch painter Frans Rijckhals (above). The painting is somewhat surreal as the fish (and the lobster to its right) is clearly oversized in comparison to the people in the left hand bottom corner.