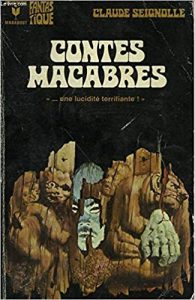 Tab Hunter was an American actor, pop singer, film producer, and author. He starred in more than 40 films and was a well-known Hollywood star of the 1950s and 1960s.

Here in Lust in the Dust.

Claude Lanzmann was a French filmmaker known for the Holocaust documentary film Shoah (1985).

Above is a fragment of a Siskel and Ebert review of Shoah.

One of a Jewish Holocaust survivor standing next to a Polish church where Jews were held prisoner before being murdered.  The holocaust survivor is being ignored by the Polish who reminisce of the moaning and hungry Jews.

A second fragment is of the famous barber Abraham Bomba who cut the hair of women before being gassed. He had to lie to them that it was just procedure, knowing that they would soon be dead.

In this clip Abraham Bomba explains how he knew many of the women personally whose hair he had to cut because they were all from his hometown Częstochowa, even from his own street.

“I knew them. I lived with them in my town, in my street, and some of them were my close friends. And when they saw me all of them started hugging me, Abe, this and that, what are you doing here, what’s gonna happen with us? What could you tell them? What could you tell?”

Then, 13:30, the most gripping moment of the whole Shoah documentary:

“A friend of mine, he worked as a barber, he was a good barber in my hometown, when his wife and his sister… came into the gas chamber… I can’t. – Go on Abe, you must go…. You have to. – Cannot. It’s too hard. – Please… We have to do it. You know it … I won’t be able to do it … You have to do it. I know it’s very hard. I know, and I apologize …  Don’t make me go on please …  Please. We must go on … I told you today it’s going to be very hard … They were taking that … [hair] … in bags and transporting it to Germany … Okay, go ahead. What was his answer when his wife and sister came? … They tried to talk to him and the husband of his sister. They could not tell him this was the last time they stay alive, because behind them was the German Nazis, SS, and they knew that if they said a word, not only the wife and the woman, who were dead already, but also they would share the same thing with them. In a way, they tried to do the best for them, with a second longer, a minute longer, just to hug them and kiss them, because they knew they would never see them again.”

Harlan Ellison was an American writer known for his prolific and influential work in New Wave and speculative fiction.

Above: the complete film A Boy and His Dog.

This is the best of opportunities to finally see that film.