Gottfried Böhm was a German architect and sculptor. His reputation is based on creating highly sculptural buildings made of concrete, steel, and glass.

He is best-known for the brutalist church Maria, Königin des Friedens.

Other brutalist churches include Wotruba Church.

Juliaan Lampens was a Belgian architect whose name has become associated with brutalism.

Brutalism is architecture which makes ostentative use of béton brut (French for raw concrete).

The aesthetic is the last phase in modernist architecture (before the advent of postmodern architecture) and it was heavily criticized by Charles, Prince of Wales, author of A Vision of Britain: A Personal View of Architecture (1989).

For lovers of the style, which includes myself, a big part of the attraction is that the imprint of the wood grain from the formwork of the concrete can be seen on the exterior concrete of brutalist structures.

They also bless new cars there. 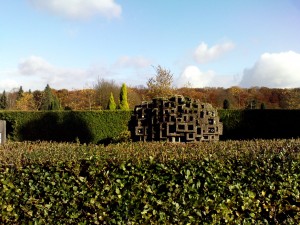 Brutalism at the Schoonselhof. Jack Godderis grave seen from the back (rear).