Hauntology is a concept in nascent state (to borrow a term from Francesco Alberoni). That’s why it is still flexible. Any good music with the word “burial” in it deserves to linked with the concept. Not including Basic Channel‘s Burial Mixes has been an oversight. I just set that straight. (within 15 minutes from time of posting, check Google)

Some background info on Basic Channel and its reggae releases labeled Burial Mix. If Wackies Records is the natural heir to Lee Perry (the same laid-back percussion, flying cymbals en relaxed groove), then the Burial Mix releases are the natural heirs to Wackies. There, we’ve just connected the 1970s to the 2000s

Tomb of Pompeii by Jean-Baptiste Tierce, 1766

A moment of silence… 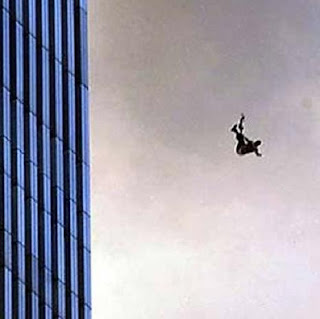 I wasn’t going to write about this, but then John from Uncertain Times posted the picture shown to the left, possibly the most haunting photo since this one. It is so easy to get caught up in the rhetorics of the Situationist spectacle when discussing 9/11, that one tends to forget these “little” tragedies, such as the man jumping on the photo, whose last two seconds of life are worth a novel in itself. 9/11, that titanical and hyperreal event, has shaped us all and I really feel sorry for all concerned. But we will never be forgiven if – at the same time – we do not think about thousands dying every day of famine.

Both Sam Shackleton‘s “Hypno Angel”[1] and Kode9 and Spaceape‘s “9 Samurai”[2] feature references to Chopin‘s Funeral March[3]. The first quite literally at 3:12 in the track, the latter throughout the recording.

Both tracks are in the dubstep genre, dubstep is related to hauntology. Both these two recording exemplify hauntology’s preoccupation with the aesthetics of death in a post-9/11 world. Musical hauntologists are advised to read the music sections in the as of yet untranslated French book Principles of an aesthetics of death, with its references to the “Funereal” outings of Mozart, Beethoven, Chopin (“Funeral March“) and Schubert (Death and the Maiden [4]).

In the hauntosphere, Esotika has a post on hauntology and John Maus.[5]

This is my third post on Georges Bataille‘s general economy. The first was here[1], the second here[2].

This post consists of a quote by the designer Nic Hughes I believe, author of the blog Haunted Geographies.[3]. Yes. Haunted. As in hauntology.

“In ‘The notion of expenditure’ Georges Bataille concentrates on the more destructive expressions of potlatch, specifically ‘non-productive expenditure’- the type of ‘Killing wealth’ only rarely experienced these days. For instance, the KLF’s burning of a million pounds[4] or Ryoei Saito’s cremation[5] of 160 million dollars of fine art. For Bataille, ‘sumptuary moments’ are revolutionary in themselves, purely because they are the antithesis of use. Games, war, spectacle, art, non-reproductive sex, all challenge the tyranny of utility. They ‘represent activities which, at least in primitive circumstances, have no end beyond themselves’ (Bataille, 2004, p118). Later he spins off on a more Nietzschean tact, extending the metaphor to genocide and the destruction of a whole class- the power elite potlatch.” –Nic Hughes at Haunted Geographies [6] Me, my brother and our stuffed dog

Reminiscent is one of my favorite adjectives. It says all and so little. To describe something as “reminsicent of” always requires the reader to know the item it reminds one of. Auctorial descriptives belong in the category “reminiscent of.”

This post’s meaning of reminiscent falls in to the category: memoirs. The photo was taken by Janice, the sister of my then-girlfriend Mireille and it portrays me, my brother Joost and our stuffed dog.

My brother and I got the stuffed dog at the auction house we worked at, we were in our very early 20s at the time and we lived in a small apartment in the Bestormingstraat, Antwerp, which we rented for very cheap, about 100 Eur per month. We used to put the dog outside on the window sill of our apartment, people thought it was real dog and sometimes signaled us that we had accidentally forgotten our dog “outside” on our second-floor apartment. The Critical Dictionary (French: Dictionnaire critique) was a regular section of the journal Documents. It offered short essays by Georges Bataille and his colleagues on such subjects as “Absolute“, “Eye“, “Factory Chimney”, and “Keaton (Buster)“.

In the entry for aesthete one finds the following sentence:

“When it comes down to it, these words have the power to disturb and to nauseate: after fifteen years, one finds the shoe of a dead woman at the bottom of a cupboard; one throws it in the rubbish bin.” […] The unfortunate who says that art no longer works, because that way one remains disengaged from the ‘dangers of action’, says something deserving of the same attention as the dead woman’s shoe.” (translation by Art in Theory).

Bataille never fails to intrigue me. I must confess – and I always do – that I do not understand one iota of what he means by the image of a dead woman’s shoe in relation to art and aesthetes, but not understanding is a very big part of the attraction. As I stated before, I like my philosophy poetic and incomprehensible. Adorable seventies graphic design on the book depicted above.

Of course, the classic illustration of unreason is: The Sleep of Reason Produces Monsters is a 1799 print by Goya from the Caprichos series. It is the image the sleeping artist surrounded by the winged ghoulies and beasties unleashed by unreason.