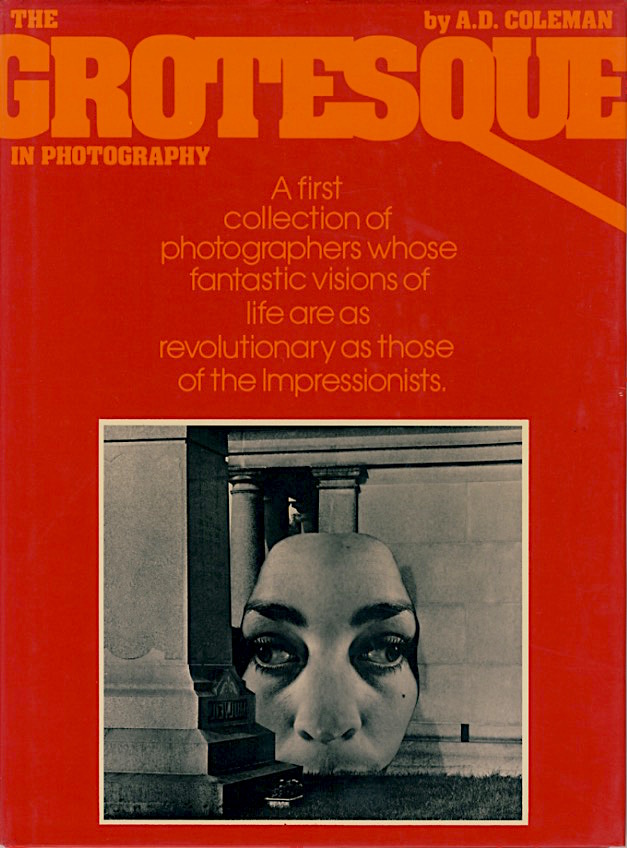 The Grotesque in Photography. Coleman, A. D. Summit Books, 1977.

The death of Fakir Musafar led me to A. D. Coleman‘s study of the grotesque in photography.

Like this: Charles Gatewood directed Fakir Musafar’s Dances Sacred and Profane, Gatewood also wrote Sidetripping (1975) which was praised by Coleman, which led me to Coleman’s book The Grotesque in Photography (above).

The grotesque is one of my favourite sensibilities.

I’d like to own this book. Can anyone tell me which photo is on the cover? Helen Levitt (August 31, 1913 – March 29, 2009) was an American photographer. She was particularly noted for street photography around New York City. Street photography is connected to candid photography, both practices are becoming cumbersome in the internet era with regards to privacy. “Half Prada” from High Fashion Crime Scenes.
(c) Melanie Pullen (in the public domain as long as the orignal author is credited)

I find Melanie Pullen‘s High Fashion Crime Scenes[1] photo series by E-L-I-S-E. Pullen is a thirtiesh American photographer noted for her series based on the reenactment of true crime scenes.

I decide to investigate.

The first thought that entered my mind is that obviously, Pullen is influenced by the aesthetics of French photographer Guy Bourdin[2], especially his take on the aestheticization of violence.

I hear an echo of Weegee‘s work.

Can Pullen be classified as crime photography?

And then, the work of Ashley Hope![3] Her paintings are based on crime scene photographs of murdered women, exclusively. Transgressive.

My first conscious experience of liking cemetries comes from climbing Mont Juic in Barcelona and seeing what appeared from a distance as a high-rise city. In reality that high-rise city was a multi story cemetery.

Last week I visited the neighbouring cemetry from where I teach.

… and is rather smallish compared to the huge and worldwide known (to cemetry enthousiasts) Schoonselhof cemetry, the artist’s cemetry of Antwerp.

The pictures are of photos mounted on the graves, usually aureoled by oval frames. I like the washed-out spooky ones. One of the joys of photographing is photographing photographs. After Sherrie Levine: After After Edward Weston.

A cemetery in Hoboken, Belgium The current entry of gratuitous nudity does not even feature nudity … only hints at it (see innuendo). Can’t be careful enough these days! Ask the Undead Film Critic.

*Edgar G. Ulmer (1904 –1972) was an Austrian–American film director. He is best remembered for the movies The Black Cat (1934) and Detour (1945). These stylish and eccentric works have achieved cult status, but Ulmer’s other films remain relatively unknown.