Istar is a novel by Joséphin Péladan first published in 1888 with a frontispiece by Fernand Khnopff, depicting a woman, head thrown back in ecstasy and completely devoid of surrounding except for a phallic tentacled plant that grows toward her pubic area.

Eroticism 4/5, because of its “his hands were all over me” thematics first celebrated in icons #12 and 13. I had been intrigued by this cover of French decadent author Rachilde’s Monsieur Vénus for a while, and I always wondered what the cover was, even asking the blog Morbid Anatomy, which specializes in this kind of material, what it was. It turns out that this is the origin of the photograph. The anatomical sculpture was produced by André Pierre Pinson (1746-1828), a French ‘medical artist’, who made the sculpture called La Femme assise (the seated woman). Voila. Case closed.

Knife in the Water is a 1962 film directed by Roman Polański. It features only three characters and deals with rivalry and sexual tension. Polanski would return to those themes in the 1966 film Cul-de-sac. The Great Sphinx, photo by Maxime Du Camp, 1849,
taken when he traveled in Egypt with Gustave Flaubert.

This image to introduce you in the obliquest of ways to Simon Vinkenoog, a Dutch poet (Welk Masker Zal Ik Dragen) I have taken a liking to.

Yesterday, Vinkenoog introduced me to one of his favorite poems: De Stem van Vincent; which Vinkenoog called on his non-rss blog “one of the most impressive poems in the Dutch language”. It is a poem by Flemish poet Paul van Ostaijen dedicated to Vincent van Gogh. I will translate the first sentence:

Know this my son: when grief turns into life
life stops being grief

Some excerpts in Dutch: In the Tepidarium (1881) by Sir Lawrence Alma-Tadema

I quote from my text on Ingres’s Turkish Bath, but the validity is for all three paintings:

When Jean Auguste Dominique Ingres, director of the French Académie de peinture painted a highly-colored vision of a turkish bath, he made his eroticized Orient publicly acceptable by his diffuse generalizing of the female forms, who might all have been of the same model. If his painting had simply been retitled “In a Paris Brothel,” it would have been far less acceptable. Sensuality was seen as acceptable in the exotic Orient.

If – as Adonis Kyrou contended – “the modern marvelous is popular, and the best and most exciting films are, beginning with Méliès and Fantômas, the films shown in local fleapits” – the contemporary marvelous is shown in video games and on MTV. I’m not an video game expert, but have been a big fan of MTV since its inception, and it still is my favorite television station, celebrating the wonder of visual culture hour after hour.

Here is an example of those sensibilities we look for in visual culture: “Perfect”, a single by Princess Superstar. The sound is similar to Bodyrox‘s “Yeah Yeah”, the visuals (the make-up of the ladies) fit our bill.

And here is the clip by Bodyrox I referred to.

Dedicated to the phrase: “his hands were all over me.”
My guess is that many of you will be familiar with Hokusai’s print, but far less of you with the very similarly themed work by Rops. Enjoy. This is a film I chose in the mid 1990s at the video store because of its cover, not being familiar at the time with the work of Murakami (Coin Locker Babies). The key scenes are four sex scenes (see more at the wiki). Three out of these heavily feature drugs. The most exquisite one, featured in the Youtube remix above, is soundtracked by Xavier Cugat music. The audio used in this particular Youtube remix is not included in the original film. I wonder what the music is. Anyone? (De temps en temps is a song (André Hornez / Paul Misraki) voiced by Josephine Baker.)

The film’s only rival in terms of my favourite film of the 1990s is the Japanese film Audition, which is also written by Murakami.

Filip Dujardin (born July 14 1971) is a Belgian photographer. He is currently (January 18 – March 31 2008) exhibiting at the Bozar (Paleis voor Schone Kunsten) of which the highlight is this photo, a sublime Borgesian fiction. Highly recommended. 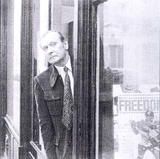 A photo of one of my heroes, French publisher Eric Losfeld, posted by “Au carrefour étrange”

Get thee there post haste. All of it is good, Bill Ward, Grand Guignol, Black Sabbath and a wonderful recent post on Losfeld himself.