I finally started writing my master thesis for a degree in philosophy.

The answer: “Yes it can be but usually it’s not.” 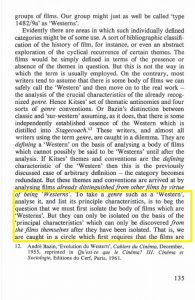 I finally read the original page on which the problem of the tautological genre-trap is first elaborated [above].

The page is from Andrew Tudor’s 1974 Theories of Film, the chapter’s title is “Critical Method: Auteur and Genre”, the page 135.

“To take a genre such as a ‘Western’, analyse it, and list its principal characteristics, is to beg the question that we must first isolate the body of films which are ‘Westerns’. But they can only be isolated on the basis of the ‘principal characteristics’ which can only be discovered from the films themselves after they have been isolated. That is, we are caught in a circle that first requires that the films be isolated, for which purposes a criterion is necessary, but the criterion is, in turn, meant to emerge from the empirically established common characteristics of the films.”

Tudor calls this an ’empiricist dilemma’.

More philosophically, you might call ‘genre’ an ostensive definition.

My way out of this quagmire?

Make use of Venn-diagrams. Some works are part of the ‘western’ set but can overlap with other sets. Via Suzanna of Wurzeltod[1] comes the work of French painter Léopold Boilly, whose work ranges from genre scenes to trompe-l’œils and occasional dashes of eroticism.

Before production of the Sade biopic Quills[2] began, costume designer Jacqueline West gave Kate Winslet a copy of Boilly’s “Woman Ironing”[3] to give her a feel for the character, which Winslet said greatly influenced her performance.

The sadly defunct arts blog Lemateurdart has one more Boilly [5] and Jahsonic previously on Quills[6][7]. And just when you think you’ve seen everything, a book manages to come out of nowhere and amaze you. Today, at the Antwerp book store Demian, I bought Principes d’une esthétique de la mort, les modes de présences, les présences immédiates, le seuil de l’Au-delà, a book essay by French writer Michel Guiomar, published in 1967 by French cult publisher José Corti. The book has not been translated to English, a possible translation of the title is Principles of an aesthetics of death. The book extensively references jahsonic favourite Gaston Bachelard.

Guilty pleasures is about liking things you shouldn’t be liking,  Roland Kaiser‘s “Santa Maria.”YouTube for example.

You shouldn’t like “Santa Maria” because it is in “poor taste”.

Another example of guilty pleasure would be a man who watches television shows marketed towards women such as Sex and the City. This is considered a guilty pleasure because it violates most western ideas what society views as masculine. For this reason the man in question may watch this show in secret because other members of the society may react negatively to a man watching a feminine television show.

The postmodern age is gentle towards guilty pleasures.

Yet, I don’t agree with Umberto Eco when he says that in a postmodern world you can no longer say: “I love you madly”.

It’s is too Barbara Cartland-ish, say Eco. I don’t agree. Long live mad love. Although I don’t agree, Eco formulated his point beautifully, in a way that captures the voice of compatriot Alberto Moravia. Here is the quote:

“I think of the postmodern attitude as that of a man who loves a very cultivated woman and knows that he cannot say to her “I love you madly”, because he knows that she knows (and that she knows he knows) that these words have already been written by Barbara Cartland. Still there is a solution. He can say “As Barbara Cartland would put it, I love you madly”. At this point, having avoided false innocence, having said clearly it is no longer possible to talk innocently, he will nevertheless say what he wanted to say to the woman: that he loves her in an age of lost innocence.” —Umberto Eco Playboy magazine, December 1969 in which Cross the Border — Close the Gap was first published in English.

Cross the Border — Close the Gap (1968) is a nobrow treatise on postmodern tendencies in literature by American literary critic Leslie Fiedler.

The notion of one art for the ‘cultural,’ i.e., the favored few in any given society and of another subart for the ‘uncultured,’ i.e., an excluded majority as deficient in Gutenberg skills as they are untutored in ‘taste,’ in fact represents the last survival in mass industrial societies (capitalist, socialist, communist — it makes no difference in this regard) of an invidious distinction proper only to a class-structured community. Precisely because it carries on, as it has carried on ever since the middle of the eighteenth century, a war against that anachronistic survival, Pop Art is, whatever its overt politics, subversive: a threat to all hierarchies insofar as it is hostile to order and ordering in its own realm. What the final intrusion of Pop into the citadels of High Art provides, therefore, for the critic is the exhilarating new possibility of making judgments about the ‘goodness’ and ‘badness’ of art quite separated from distinctions between ‘high’ and ‘low’ with their concealed class bias.

In other words, it was now up to the literary critics to devise criteria with which they would then be able to assess any new literature along the lines of “good” or “bad” rather than “high” versus “popular”.

But, according to Fiedler, it was also up to the critics to reassess already existing literature. In the case of U.S. crime fiction, writers that so far had been regarded as the authors of nothing but “pulp fiction” — Raymond Chandler, Dashiell Hammett, James M. Cain, and others — were gradually seen in a new light. Today, Chandler’s creation, private eye Philip Marlowe — who appears, for example, in his novels The Big Sleep (1939) and Farewell, My Lovely (1940) — has achieved cult status and has also been made the topic of literary seminars at universities round the world, whereas on first publication Chandler’s novels were seen as little more than cheap entertainment for the uneducated masses.

Nonetheless, “murder stories” such as Dostoyevsky‘s Crime and Punishment or Shakespeare‘s Macbeth are not dependent on their honorary membership in this genre for their acclaim.

P.S. This article is based on freely available Wikipedia code remixed by myself for the Art and Popular Culture wiki. In my previous post I argued for a revisionist approach to art history, favoring discarded art historical movements related to the grotesque and the fantastic. I called for a start of art history with the work of Bosch rather than Da Vinci. I realized when writing it that I sort of short-changed da Vinci since the latter has also made many lesser-known works including several grotesques [1] and caricatures[2]. See the book Leonardo Da Vinci: The Divine and the Grotesque by Martin Clayton.

The reason I short-changed da Vinci is that he is much better known for “mainstream” works such as the Mona Lisa and Vitruvian Man. While researching da Vinci’s relation to the grotesque I came up with Grotesque Head, a powerful caricature which is clearly the inspiration for Quentin Matsys‘s The Ugly Duchess. Enjoy.